The Renewable Heat Incentive closed on 31st March 2022 and was replaced by the Boiler Upgrade Grant on 1st April 2022. Click HERE for more information.

What are Air Source Heat Pumps?

Air source heat pumps work in exactly the same way that your refrigerator works, only in reverse.  They take free energy from the air outside and use it to heat your home and hot water.

Air source heat pumps are available as air-to-water systems which can be used to heat water for your central heating radiators, underfloor heating and to provide hot water, or they can be air-to-air systems which can only be used for warm air heating systems.

Although air-to-air systems can also be used in reverse, to provide cool air conditioning for your home, only ‘wet’ central heating systems (radiators and underfloor heating) qualify for the Domestic Renewable Heat Incentive (Domestic RHI).

Because air source heat pumps simply move the heat, rather than extracting it by burning fossil fuels, they are far more energy efficient than most other types of domestic heating technology.

In fact, air-to-water air source heat pumps typically produce 3 to 4 kilowatts of heat from just 1 kilowatt of electricity, making them up to 400% efficient.

Air source heat pumps are also relatively low maintenance, kind to the environment and offer one of the most reliable heat sources of all fuel types.

Perhaps surprisingly, they are capable of generating heat from the air even when the outside temperature is as low as minus 20º C.  Air source heat pumps are not affected by ever increasing fuel prices, lack of sunlight or diminishing supplies of fossil fuels.

From 9th April 2014 air source heat pumps which heat your home using ‘wet’ central heating systems such as radiators, will attract financial assistance through the Government’s Domestic Renewable Heat Incentive. According to the Energy Saving Trust®, for a typical four bedroom house, air source heat pumps can save up to £1,500 on annual energy bills, based on switching from a G rated LPG boiler.

Switching will also provide an income from the Domestic RHI scheme equal to 10.7 pence per kilowatt hour of renewable energy you generate. The Government estimates that the average Domestic RHI tariff payments to owners of air source heat pumps will be over £1,300 per year.

We have processed over 30,000 applications for Government Heating and Insulation Grants 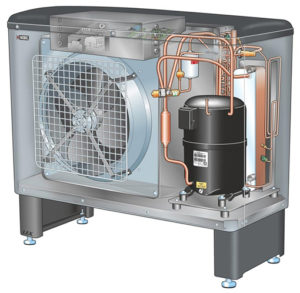 Heat from the air is absorbed into a fluid inside pipes in the system even when the outside temperature is as low as minus 20º centigrade.

This heat is transferred to a refrigerant by an evaporator, which changes the fluid from a liquid to a gas.

A compressor compresses the gas, causing it to heat up and heat from the hot gas is then transferred to the heating system by a condenser.

Once the fluid has released its heat, it is pumped back to the outside section of the heat pump for the process to continue.

Air source heat pumps contain the evaporator, the compressor the condenser and naturally the pump; all within a box about the size a domestic air conditioning unit.

Given that the air temperature in the UK is rarely less than minus 20º centigrade, even in winter, air source heat pumps can supply heat to your home 24 hours a day, 365 days a year.

The electrical energy to drive this process compared to the heating energy that is given to the house has a seasonal factor of about 3, meaning the the air source heat pump is 300% efficient.

This means that if you currently use 15,000 kWh for heating and domestic hot water after installation you only need about 5,000 kWh, saving money on your energy bills and reducing your carbon emissions.

The exact saving depends on the climate and whether you have a low, medium or high temperature heating system.

According to the Energy Saving Trust® the installation cost of typical air source heat pumps for a three bedroom, semi-detached property should be between £6,000 and £10,000 depending on the type of system and method of heat distribution system you decide upon.

Running costs can vary widely and are dependent on usage, how well your home is insulated and whether it is used to heat your hot water, or as just a space heater.

According to the Energy Saving Trust® the potential savings achieved by switching from a G rated LPG boiler to an air source heat pump could be between £1,365 and £1,610 for atypical 4 bedroom detached house.

In addition to theses savings you could also receive around £7,500 in Domestic Renewable Heat Incentive tariff payments.

The Government’s own Domestic Renewable Heat Incentive Tariff Calculator can provide you with an estimate of your tariff receipts. You can find it HERE.

Do you have enough space for an air source heat pump?

Domestic air source heat pumps are about the size and shape of a domestic air conditioning unit and you will need space outside where the unit can be installed, either against a wall or on the ground.

It will need space around it to provide a good air flow but cannot be within 1 metre of your boundary due to planning restrictions.

Will I cut my heating bills by switching to an air source heat pump?

The less efficient your current heating system is, the more you will have to gain by installing a air source heat pump.

If you are using coal or electricity at the moment, you will achieve a greater saving by switching to an air source heat pump than if you are currently using mains gas.

Can I get a grant to install an air source heat pump?

From 1st January 2020 grants may be available to help pay for the installation of an air source heat pump in your home from the Affordable Warmth Scheme. It is extremely unlikely however, that if you obtain a grant to help install an air source heat pump that you will also be able to claim Domestic Renewable Heat Incentive tariff payments. It will be an either / or choice.

More information about grants for installing an air source heat pump can be found HERE.

How much will I receive in Domestic Renewable Heat Incentive tariffs for installing an air source heat pump?

Currently you will receive 10.71p per kilowatt hour (kWh) but this is adjusted for the Seasonal Performance Factor (SPF) of the particular heat pump you have installed. An air source heat pump with an SPF of 3 will on average deliver 3.0kWh of heat for every 1kWh of electricity it uses.

The adjusted annual RHI tariff payable is calculated as follows:

How important is insulation to the effectiveness of an air source heat pump?

It is very important.

Because air source heat pumps deliver heat at a lower temperature over a longer period of time than similar oil or gas heating systems, your home will need to be particularly well insulated in order to take full advantage of your new renewable energy heating system.

As part of the application process for Domestic Renewable Heat Incentive you will need to complete an assessment to ensure that your home complies with loft and wall insulation energy efficiency requirements.

How do I find a reliable installer for air source heat pumps?

We have access to the largest database of installers of domestic air source heat pumps in the UK.

Simply complete the form on this page and we will introduce you to up to three accredited installation companies for you to request quotations from.

We do not charge you anything for this service and you are under no obligation to place an order with any of the installers that we introduce you to.

NIBE has been manufacturing energy-efficient and sustainable climate solutions for your home for over 70 years.

NIBE combine renewable energy with new smart technology to offer effective solutions so that they can create a more sustainable future.

With an air source heat pump from NIBE you can keep your home warm during the winter and provide hot water all year round.

By utilising the energy from outdoor air, you can reduce your energy bills in an eco-friendly way, whilst at the same time creating the perfect level of comfort for your home.

The air source heat pump works down to an outdoor temperature of –20°C and at the same time supplies up to 58°C in supply line temperature.

The U.S. Is Ignoring the Climate Benefits of Air Source Heat Pumps

A new study says the wider use of air source heat pumps for heating and cooling homes and buildings could sharply reduce global fossil fuel emissions, but the solution has received relatively little policy support from governments, and its advantages are poorly understood by consumers.

The study, led by researchers from Columbia University’s Center on Global Energy Policy, suggests that further innovation with air source heat pumps combined with regulatory measures such as a carbon tax could eliminate 12% of global greenhouse gas emissions from the heating and cooling sectors.

While policymakers have focused most of their attention on decarbonizing the transportation (29% of global emissions) and the power sectors (28%), the potential payoffs from helping heat pumps become more competitive have received relatively little attention, says the study titled “Decarbonizing Space Heating With Air Source Heat Pumps.”

When powered by “zero carbon electricity,” the study shows how air source heat pumps can be competitive with natural gas-fired equipment in three U.S. cities with different climates and energy costs. They are Atlanta; San Diego; and Fargo, N.D.

The study focuses on air source heat pumps that extract thermal energy from the outside air, rather than more expensive ground source equipment that extracts it from ground temperatures that tend to be warmer than the outside air. Air source heat pumps are less efficient in cold weather but can be made more efficient by electric resistance heating.

In the typical system, in heating mode, a refrigerant evaporates when it flows through an outside heat exchanger and then releases heat to the indoor heat exchanger as it condenses back to liquid. In the cooling cycle, the process is reversed.

China is vigorously promoting air source heat pumps, and subsidies for installation can cover up to 90% of unit costs in northern provinces, where coal-fired heating has traditionally dominated.

The study concludes that existing policies in the United States are “insufficient” to achieve zero emissions with air source heat pumps and that one barrier is “a lack of information” to consumers about the technology’s improving performance.

It also recommends informational programs to combat the business-as-usual tendencies of “contractors’ and homeowners’ greater familiarity with incumbent fossil fuel technologies and the slow turnover of the building stock.”

Another Government scheme to help with heating systems in domestic households is the Affordable Warmth Scheme. This provides grants to help to replace broken heating systems and to install insulation in homes where one of the occupants receives a qualifying State Benefit, Tax Credits or other allowance.

More information about the Affordable Warmth Scheme can be found HERE.